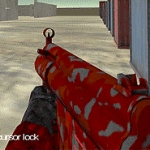 Masked Shooters Assault is a fun multiplayer first person shooter game. Join the room, or create your own, and play with your friends. You can choose from three maps that represent different game modes.You can kill in an abandoned factory, or in an arena where you can effectively cover, or shoot on enemies from high towers. You can choose from two basic modes of play. First one is FFA, there are no rules and everyone is against each other and the second one is the classic mode of two teams that fight each other. So do not be afraid to try something new, with great graphics and lots of fun. Enjoy the game. Masked Shooters: Assault is one of the amazing free games in friv2014.com. Try Masked Shooters: Assault and Pick your best Friv 2014 game in the awesome long list with no charges.