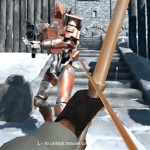 It's the middle of the 15th century, Earth was invaded by hostile aliens eager to take over the world. You as a knight, vowed to defend your land to any invaders and kill those who will resist. With just your bow and arrow for you long range weapon and a shield and a sword for your melee, you have to defeat all the aliens and destroy their mothership! Play Medival VS Aliens online at friv2014.com. You can play it in fullscreen to have fun with it. Medival VS Aliens is a great Friv 2014 game to play with no cost.